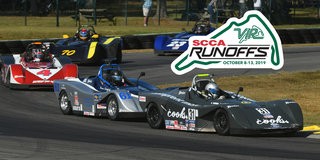 TOPEKA, Kan. (Nov. 29, 2019) -- December just wouldn’t be the same without Sports Car Club of America® Runoffs® races airing on television for a wider audience to view and enjoy. And for a third year in a row, millions of households throughout the country will be able to experience the excitement and energy of SCCA® competition when select National Championship events from VIRginia International Raceway (VIR) air Sundays on CBS Sports Network.

Exposure on CBS Sports Network allows Sports Car Club of America an opportunity to showcase its thrilling brand of road racing to millions across the nation while also displaying accessibility to motorsport activities, said SCCA President and CEO Mike Cobb.

“SCCA’s National Championship Runoffs are the three most exciting days of racing anywhere in the United States,” Cobb said. “Selecting eight races for broadcast on CBS Sports Network is always difficult, but we’ve again decided on races that connect with a wide audience and showcase the skill and passion of our members.”

The SCCA National Championship Runoffs has evolved into what is now commonly agreed to be the pinnacle of American motorsports. Since 1964, the SCCA has crowned Road Racing’s National Champions at the winner-take-all, single race Runoffs format through dozens of separate races over three days. The 56th annual Runoffs took place in 2019 at VIRginia International Raceway. It was the first time SCCA’s National Championship visited that venue found along the border of North Carolina and Virginia.

With broadcasts presented by Mazda, all 2019 Runoffs races from VIR are available for online viewing anytime at the 2019 SCCA Runoffs OnDemand webpage at SCCA.com.

The Sports Car Club of America®, Inc., founded in 1944, is a 67,500-member motorsports organization that incorporates all facets of autocross, rally and road racing at both Club and professional levels. With headquarters in Topeka, Kansas, the SCCA annually sanctions over 2,000 events through its 115 Regions and subsidiary divisions. Much of the SCCA’s activities are made possible with support from the following Official Partners: Hagerty, the Official Insurance Partner of SCCA; Hawk Performance, the Official Brake Products of SCCA; Sunoco, the Official Fuel of SCCA; and Tire Rack, the Official Tire Retailer of SCCA. To learn more, please visit www.scca.com.