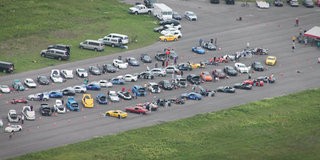 In a mix of BMWs, Chevrolet Camaros and a lone Ford Mustang, Austin Don took the F Street victory, his first Champ Tour win, in a BMW M3. He led after day one and was able to hold on against chargers Chris Dressler and Ido Waksman for a 0.410-second victory. Dressler and Waksman finished second and third respectively for the remaining trophies in the nine-driver class.

In Super Street R, James Yom took the victory over Grant Reeve by 0.557 second, calling it a “war of attrition” as both, along with Matthew Braun, were dirty on their first two runs on Sunday. Yom was able to lay down a 57.720-second hero run compared to Reeve’s 58.254 and Braun’s 57.991. Reeve held on to second place, Braun slotted into third, and Jeff Hurst claimed the final trophy position in fourth.

C Street showed the continued success of DJ Alessandrini, who is proving to be one to beat in the class at every event he’s entered in this season. His co-driver, Dennis Barrett, was second in the 13-driver class, 2.372-seconds behind. Win-hou (Tony) Chow put up a good fight for second in his NC Hardtop MX5, just 0.075 second behind Barrett. Devin McCuen claimed the fourth and final trophy position.

In A Street, Cody Hunt prevailed after having a shock failure on the morning of Saturday competition. Stop us if you’ve heard this story before. Fellow Corvette owners, Larry Casey and Sam Strano offered help and Cody ended up competing with Sam Strano's spare front shocks (mismatched from Cody's rear shocks.) Earlier this year, Cody finished in the 4th trophy position at the NJ Pro after suffering shock failure on the way to the event and switching to Sam Strano's spare shocks at that event as well. Erik Carlson, Todd Kean, Hank Wallace and Mark Sarcevicz claimed the second through fifth place trophies respectively in the nearly Spec Chevrolet Corvette on BFGoodrich tires class.

Street Touring Xtreme was a story of perseverance as Eric Simmons suffered engine trouble in his Scion FR-S. He went on to finish second in the car of the eventual winner, James Tatad. Simmons' codriver, Mark Labbancz finished third after switching to Andrew Chow's BMW 323i. Chow finished in the fourth and final trophy spot.

D Street Prepared is always a great class to watch with Sam Strano and John Vitamvas driving the BMW 330ci and Tamra Hunt in her Mazda RX-8. On day one, just 0.007 second separated the eventual winner Sam Strano and car-owner Vitamvas. Hunt set the fastest day-two run to secure second, but it wasn't enough to catch Strano. Vitamvas finished third, though his final run had the scratch time to win—had it not been for the early cone.

E Street Prepared saw a unique winner—the Mazdaspeed6 of Clint Griest and Johanna Foege, one of your 2018 Wendi Allen Scholarship Recipients. The car suffered rear differential issues on day two, causing Clint to win the class on his first run, and Johanna to make adjustments during a mechanical to try to make the car work to stay in the trophies. Unfortunately, she finished one out of the trophies in fourth.